The product has been successfully added to your cart

Please add products to your cart.

Please add products to your wishlist.

I never thought my pulled pork was anything special until I started making it for other people this year during Covid lockdowns and now everyone wants the recipe! Pulled Pork is such an easy meal to both make and share already, but the Cinnamon and Brown Sugar really take the flavors to the next level. First, let's talk ingredients. 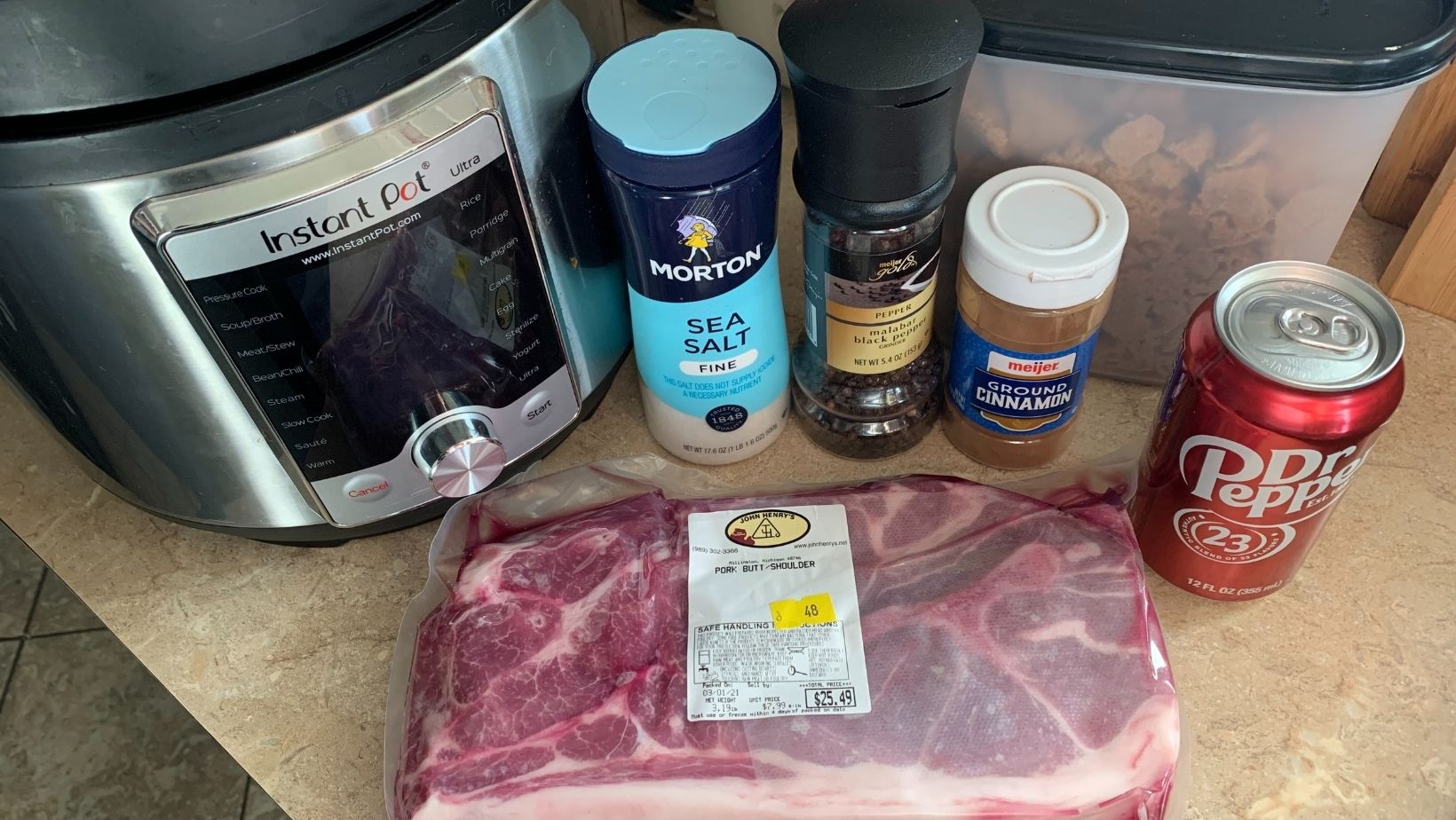 You'll need to start with a large Pastured Pork Butt, or Shoulder Roast from John Henry's. You can also substitute a beef roast if you prefer but it does change the flavor a little. The next most important ingredient is the can of soda. It can really be any dark soda, the sweeter the better. I like the Dr Pepper flavor personally, but we've also made this in the past with regular Coke, Wild Cherry Pepsi, and Orange Vanilla Coke and they have all turned out great. We don't drink a ton of soda so whatever variety happens to be in the fridge at the time is totally fine! You'll want a little bit of water to add to the bottom of the Instant Pot as well, just to avoid getting a burn notice once the sugars in the soda start to cook down. Sea Salt, Black Pepper, Cinnamon & Brown Sugar are the main seasonings you'll need. I don't typically use measurements or anything because it's all relative to the size of the roast. I do like to use generous amounts of the salt, pepper and cinnamon though. 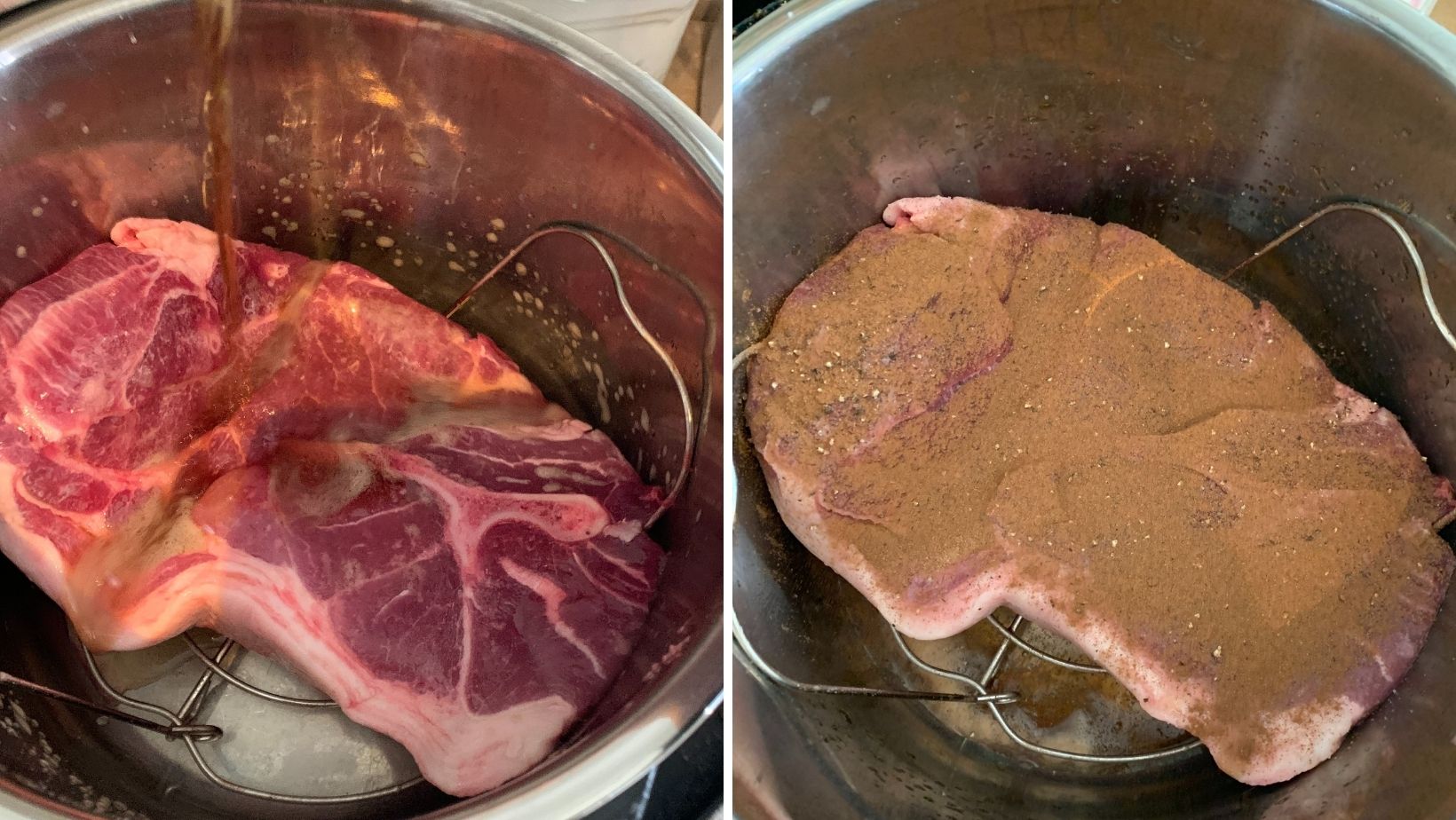 Start by adding about a cup of water to the bottom of your instant pot. Insert the trivet and place the roast on top of it. Pour about half of the can of soda slowly over this side of the meat so it puddles a little here and there. Sprinkle a generous amount of sea salt first, then black pepper, and finally a thick layer of cinnamon. Don't be shy! 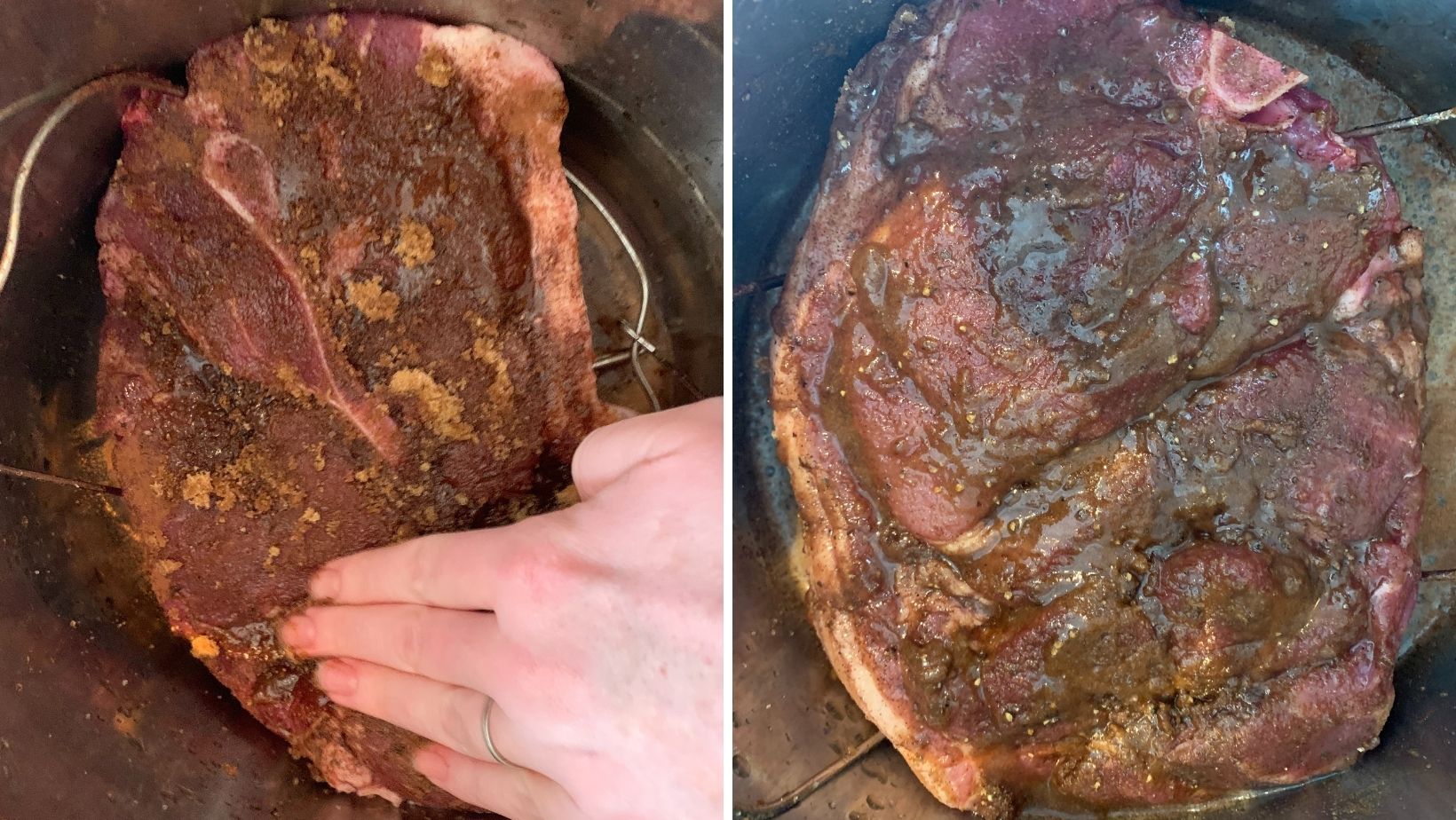 Put two big scoops of Brown Sugar on top of the cinnamon and start rubbing/mixing all the seasonings together into the meat. The sugar and soda will create a sort of paste that you can use your sticky fingers to rub into all the cracks and splits in the meat. Flip it over, so the sugared side is now down, and repeat the steps again for the second side. Use up the rest of the soda, then add salt, pepper, cinnamon and brown sugar, and rub the paste all over this side of the meat as well. When you're ready, set the Instant Pot to cook at high pressure for 20 minutes per pound of roast. This one was 3.19lbs so I set it for 90 minutes just to be on the safe side. When the IP timer goes off, leave the roast in to naturally release the pressure while you start some side dishes. This night we kept it simple with mashed potatoes and mixed veggies. 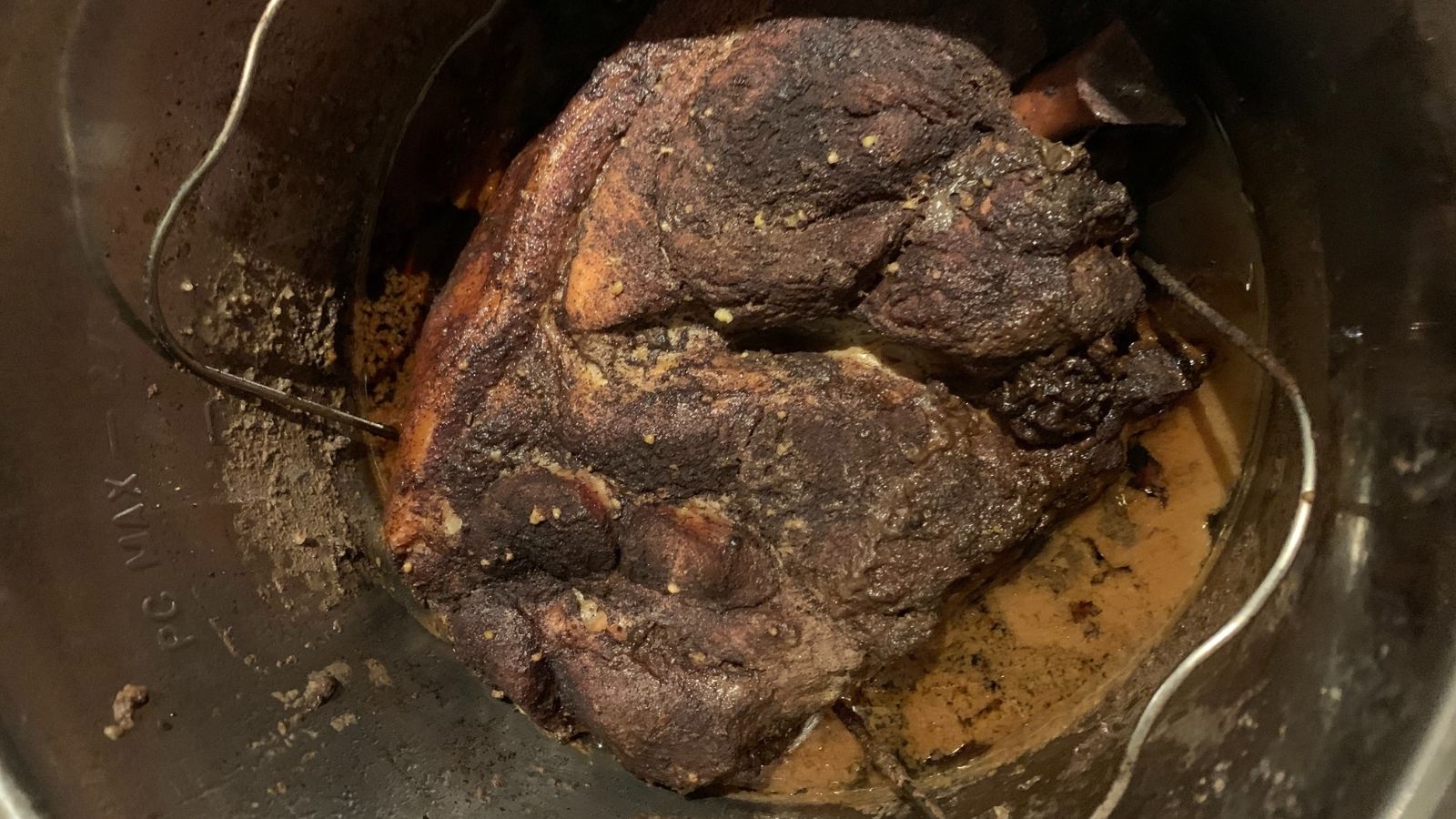 When the roast has finished releasing the pressure, then it should be ready to be served right away! Fair warning, this roast is going to fall apart! The meat completely pulls away from the fat cap and bone and consolidates all that yummy flavor into the meat. The result is a delicious pork roast with great texture and a subtle sweet flavor. No BBQ sauce needed, unless you really want some! 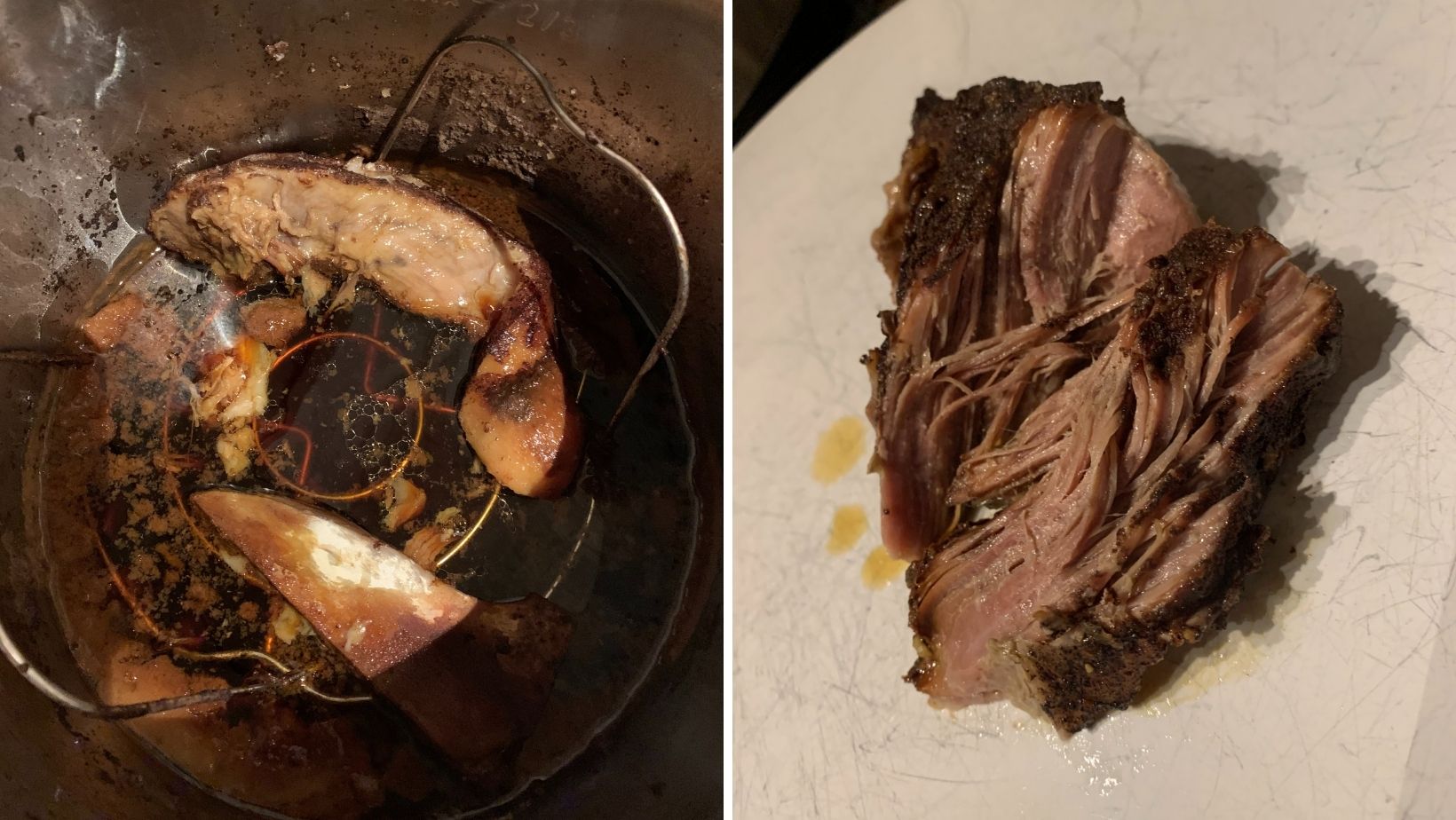 You can see in the picture here that all that's left in the pot is the fat cap and bone. The meat basically shreds itself and it's so delicious!
I hope you love this recipe! Be sure to tag @johnhenrysmeats in your photos on Facebook! Visit our recipe corner for a shortcut to the full recipe!

This delicious recipe is easy to make, has a lovely presentation and cooks up quickly!

These Cheesesteak Stuffed Peppers are healthy, low-carb and sooooo easy to make! Our recipe serves 6 and it's ready to eat in under an hour.

× The product has been added to your shopping cart.

Enter your email address and you will receive a mail.

Sorry! we are yet to provide our service in your area. Please select a different location.

Or enter a pincode